The Little Fish that Roared

THE LITTLE ENDANGERED FISH THAT ROARED:

The Edwards Aquifer is the sole source of water for San Antonio, Texas. The Aquifer contributes surface water flow in the Guadalupe River through Comal and San Marcos Springs, both of which are home to endangered fish and other aquatic species, including the fountain darter. In 1993, a U.S. district court ruled that the Secretary of the Interior allowed takings under the Endangered Species Act (ESA) by not ensuring adequate flows from the Springs. The Texas legislature responded to a court mandated deadline to protect springflow by establishing the Edwards Aquifer  Authority  (EAA)  to  regulate  groundwater  withdrawals.

In  1996,  as  a severe drought affected the region, the Texas Supreme Court overturned a state trial court ruling that EAA was unconstitutional. During a second ESA suit alleging that groundwater pumpers were causing takes of endangered species, the U.S. district court ordered the implementation of a plan to reduce pumping from the The court’s order was later vacated and the litigation continues.

The Edwards Aquifer region has finally reached the point where the Aquifer is unable to provide for the needs of all those who depend upon it during dry years, from persons directly over the Aquifer, to those persons and endangered species at Comal and San Marcos Springs. Without a fundamental change in the value the region places on freshwater, a major effort to conserve and reuse Aquifer water, and implemented plans to import supplemental supplies of water, the region’s quality of life and economic future are imperiled.

These words at the beginning of the order mandating federal management of the Edwards Aquifer on August 23, 1996 were the result of decades of political and legal stalemate over the sole source of water for San Antonio — the Edwards Aquifer. Decades of disagreements among local, regional, state, and federal governments, five years of federal litigation, and one year of severe drought preceded the U.S. district court’s attempt to protect endangered species dependent upon springflows from the Edwards Aquifer through a court mandated drought management plan.

Management of the Edwards Aquifer has been a controversial and divisive issue for over forty years. Bitter conflicts have erupted between rural and urban interests, and between pumpers and those living downstream of its spring outlets who depend on springflows for their surface water. Some have demanded regulation of groundwater withdrawals, while others have contended that such limitations would violate private property rights under the Texas Constitution and the Fifth Amendment to the U.S. Constitution.

The Endangered Species Act became the instrument that eventually brought state regulation to the Aquifer and the end to unrestricted withdrawals of groundwater. Across the western United States, the ESA implementation is clashing with the overutilization of water resources with increasing frequency.  For more please click below…….. 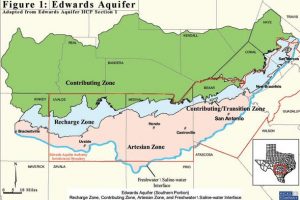 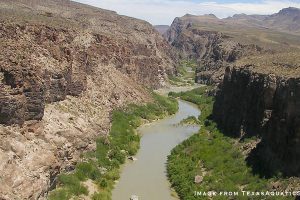 The Evolution of Interbasin Surface Water Transfer Policy in Texas:[...]